During the last weekend of April, I performed a minor miracle for a body, who from time to time, has accepted middle age as a time of athletic regression. Not anymore. I rode from Pleasant View to Pleasant Grove (98 miles) then got on the bicycle the next morning and rode back! That was the culmination of training since last November, and proof positive that I could participate successfully in the Cycle Salt Lake Century. Now I say, I can look at middle age and spit in it's face!

Yesterday, I did in in fact, ride the 100-mile Cycle Salt Lake Century! The first 70 miles were really quite a bit of fun! The last 30, not unlike my Pleasant Grove ride, were pretty tough! It was a great event and a great day. Temperatures reached 90, and I drank about 1.5 gallons of water during the ride. My friend Troy, rode the entire event with me, even though he had been saying he'd do only the 66-mile option. Welcome back to century riding Troy! 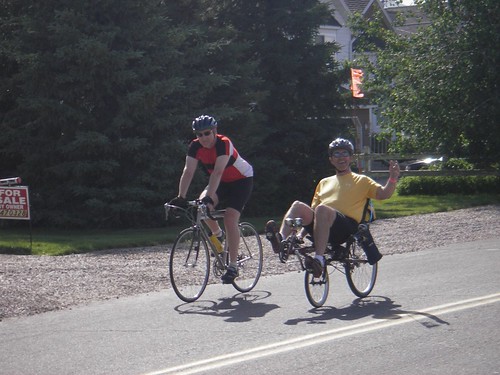 I was surprised at a number of things at this event -- my first organized century ride.