It's been a long while since I've woken to the sound of Sheb Wooley singing "It was a one-eyed, one-horned, flying purple people eater..." A few days ago, I realized I missed it.

For all of the 1960s, I awoke to the sounds of KAPA, 1340 on your radio dial. At 7 am, Mom turned it on and all the speakers of our whole-house intercom system played it. It was time to get up and get going.

With the passage of time, it's easy to see that KAPA was more than a radio station. It was a core fixture in that community called Raymond, Washington, or more broadly Willapa Harbor. Its one-kilowatt transmitter and the people behind it brought six or seven thousand people more tightly together. And yes, thinking about it, I miss the tightness of the community it bound together.

A few days ago, a friend mentioned that her kids were out of school. Nearly all nearby junior and senior high schools were closed for two weeks due to an abundance of coronavirus cases. As a senior citizen with no kids or grandchildren in school, I had no clue! I was taken aback at my ignorance of this significant event in "my community". And KAPA came to mind. I should have known! I should have heard about it on the radio! But I have no local radio station. I listen to KUER, the local NPR affiliate in Salt Lake City and KCSM a 24-hour jazz station in San Mateo, California. I live in a global village with a streaming smart speaker, but it's questionable whether I have a community!

All of my youth was spent in Raymond, Washington. KAPA was launched in 1950. I was launched in 1952. If I'd remained there as an adult, I'd have more of a story to tell. As a kid, though, I had no interest in the workings of the community. It was just what it was, and I lived in that space. But I have a collection of images of the place and the role KAPA served there. Here's that collection. 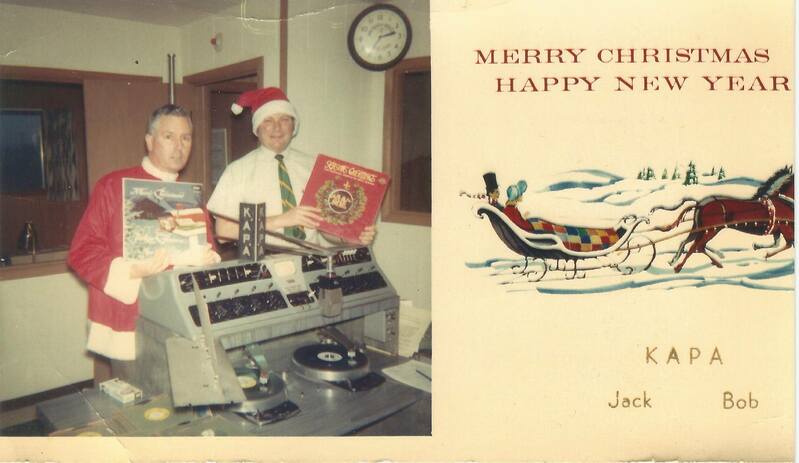 Jack Reavley and Bob Claunch bought KAPA in 1956. They owned and operated the station until 1982. So the story of KAPA is also the story of Jack and Bob. There was just one radio station. Jack and Bob ran it successfully: selling ads to every business in the area and integrating with schools, community organizations and churches. They came at it with prior experience in military radio broadcast and theater. Somehow they knew, or quickly figured out how to serve a small town crowd. From today's perspective I see that as quite an accomplishment for a couple of guys from out of town who bought a radio station.

In the sixties, Jack Reavley usually did the morning show. I have to imagine it was a challenge to serve the diverse listening audience. I know the programming was a hodge-podge. Burl Ives, Johnny Cash and Frank Sinatra were heard. I don't think we heard Elvis in the morning show, but but we did hear polkas, since there were many Scandinavians in Raymond and South Bend. All of that reflected the community, but what I think defined community were the local announcements.

Each weekday morning, we heard birthday and anniversary announcements as Jack read the content of the local Lions Club birthday calendar. Every April 1, I heard him (or some of the April Fools celebrities) announce my birthday, and every July 25 he announced the anniversary of my Mom and Dad. This daily routine had particular significance in our household, because for many years my Dad chaired the Lions Club project to sell and produce that annual birthday calendar. Dad chaired the project, but Mom did the painstaking clerical work of assembling and proofreading the calendar from the family notecards provided by Lions Club members who sold the calendars to families throughout the town.

Each weekday morning, we also heard Jack announce the hot lunch menus for Raymond, South Bend, and Willapa Valley schools. This too, had particular importance in our household, since for many years, Mom was the head cook for Raymond Schools. If the menu was read incorrectly, Mom would call the radio station to correct the record (fifty years later I can't say that this is a fact, but since it makes a good story, I'm sticking to it). If Mr. Reavley made a snide comment about what they were serving in Raymond schools, Mom would fume about it privately (this is definitely a fact).

So no, it would be impossible to miss a school closure!

Raymond was all about sports, of course. KAPA was licensed as a daytime station, operating from 6:30 am to 6:30 pm, but the FCC also permitted limited nighttime operations at reduced power to cover the local sporting events. On KAPA, Conrad Strozyk provided the lively play-by-play announcement of game activity for every high school game. That local service was a popular and profitable service for the station. During the football season, the McGuires had a small role to play in the enterprise. The town football stadium was 200 yards through the woods east of our kitchen, but the field lacked a telephone line. KAPA and Harvey McGuire ran a line from the stadium to our house so the game play-by-play could be fed to the station from our telephone. The line was busy for a few hours!

McGuire home and ballfield, pretty much as they exist today.

KAPA also integrated with the schools by hiring high schoolers to be afternoon disc jockeys at the station. This was clearly a stroke of genius in marketing and community relations. Bob Claunch reached out to local drama and speech teachers to coordinate the effort. At Raymond High School that was my drama and English teacher, Mr. Ball. When I was a sophomore, Mr. Ball asked me if I'd like to interview for an announcing position at KAPA. I didn't have the courage to say "yes", so I said "no" (but, yes, I've often regretted it)!

Later in my sophomore year I did go to work for the largest retailer in town, Dennis Company. Although I didn't advance my theater and media skills there, it too was a great opportunity: a natural and privileged outgrowth of my connections in the community. While there, I was dramatically able to see and understand the connection between the radio station and one of its principal advertisers.

At that time, KAPA had hired Virginia McKinney (mother of some of my school friends) to do an afternoon show at the station. Virginia was a vivacious person with strong connections and a commitment to boosterism. She was the champion of school sports, school music, and school arts. So she was perfect for the job. At one point in her career there, she thought it a good idea to improve the cultural awareness of the townspeople by playing classical music at the station.

Dennis Company was a principal advertiser at KAPA, and also continuously played the station on the PA system in the store. One afternoon, I was nearby when Gary Dennis, the owner, heard classical being played. I don't remember what music it was, but I do remember what Gary had to say.

"What the Hell does that woman think she's doing? No one wants to hear that crap. I've got a phone call to make. We'll just see about that!"

Classical music was a short-lived feature at radio station KAPA.

Virginia McKinney, though, did get back at Gary Dennis not too much later. The Dennis Company premix concrete plant was directly across Highway 101 from the KAPA station. One of the joys of my work was operating the plant and unloading railcars of sand and gravel. After being trained, I often did that task alone, operating a powered drum capstan winch to move the loaded cars and climbing into the cars to help the sand move out to the conveyor. One afternoon, Virginia looked out the station window to witness me doing this operation solo. I wasn't listening to the radio, but I heard about it later! It seems that she went into a tirade about Dennis Company allowing a kid, yes a KID, to perform these dangerous operations alone. In terms of industrial safety, she did have a point. My solo work unloading railcars was no longer performed during the afternoon show.

That's what I knew of radio station KAPA and how it bound together our community. We experience community, and think that we know it. I experienced my community and thought that I knew it. Then 40 years later in 2009, I saw the film documentary, "Bob and Jack's 52-Year Adventure", a story of two gay men who met in the Army and lived, with a few bumps in the road, happily ever after. It was a joy to hear their real story after so many years, and to hear their voices again, voices that I knew with absolute surety. I understand that they have since passed, but I salute them for their success against the odds in a small lumber town in Southwest Washington. I thank them for their contributions to a community that nurtured me. 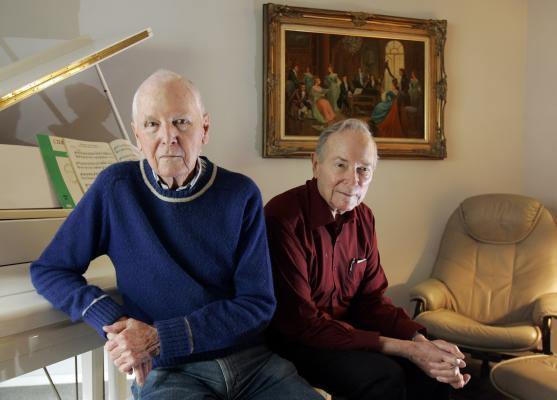 And now, for your listening pleasure, The Purple People Eater: