The Grandpa, The Piano, and The Goat


Of my numerous piano tuning stories, this one is always a favorite. That is, of course, because it also involves a great storyteller. 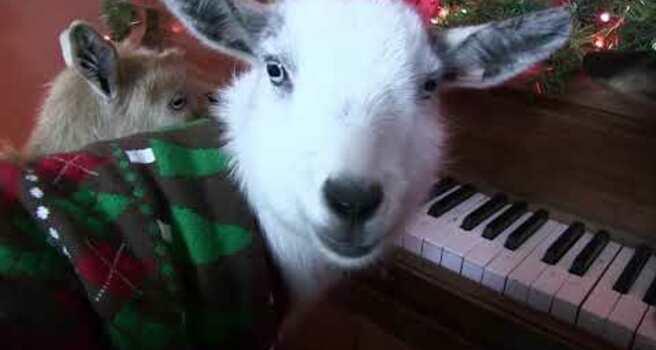 Storytelling comes naturally to folks born before 1940. I know, not because I'm that old, but because I sat around the Sunday dinner table with my grandparents and aunts and uncles. The stories were told, and retold, and enhanced, and corrected by others. It was just pure fun to listen, learn and laugh.

Grandma C started the conversation predictably by asking, "Is the piano really far out of tune?"

While suppressing my laugh I said, of course, "Yes, it really is. It seems to me that maybe it's been 30 years!"

Grandma C laughed. "Yes, I thought it needed it. We had the missionaries over for dinner and one of them could really play. I mean he was good! He even played the organ at the Tabernacle. He played the piano so well, and after playing he turned to me and said, 'Sister C, you really need to have this piano tuned!'

Grandma C smiled and agreed, "Yup. I figured it really needed to be tuned, because you know ... we had those missionaries over for dinner about 15 years ago!"

Score one for Grandma C.

As I continued my work, Grandpa C and I had discussions about pianos and their qualities. Eventually he got around to telling me that over the years he'd purchased 15 different used pianos. That was surprising, given the condition of his piano, but he explained, "When my grandchildren marry, I like to give each one a piano. Of course not all of them play, but if they have grown up playing, they should have a piano of their own."

I couldn't argue with that, and let him know that I'd given away a few pianos myself, but couldn't match his record.

He told me that his recently married grand-daughter, Melanie, had moved into a new subdivision. "I was over there to see her and her fancy new house, and I tell ya, the weeds were knee high and headed toward chest high! I told her, 'Melanie, what you need here is a goat. A goat will clean up these weeds just fine.' That girl shook her head again and again. 'No Grandpa,' she said, 'we CANNOT have a goat in this subdivision.' Well I was not to be dismissed and I insisted despite her protests that a goat was just what she needed. As a matter of fact I had a goat that I thought would do great work on those weeds."

"A week later," he said, "I went over to Melanie's house and backed the horse trailer into her driveway. She came out screaming, 'Grandpa, STOP! We cannot have a goat here.' 'Now Melanie,' I said, 'just calm down. Come out and have a look at this thing.' She couldn't really stay away so she came out to the trailer, and when I opened it she could see the pretty piano I'd brought her. We both laughed a good one, and she cried a bit. I think she liked the piano. But I still think she could have used a goat!"

And that's tuning pianos for three generations in Utah.