Recently with my wife, Terri, we have scanned thousands of pictures from the collection of Terri's mother, Sylvia Wakefield Dunbar. With Sylvia's recent passing, this has been a process of greiving, but also of remembering family times and places. Beyond remembering, though, it has also been a process of discovery.

One of the most meaningful discoveries was in a letter written by Mary Stratton Wakefield, Terri's maternal grandmother. She wrote the letter in about 1950, addressed to the children of her brother, John Stratton. John died at the age of 35 while he still had young children. Their aunt Mary wanted to tell them some of the stories of their father's life that they would not be able to hear in person. The letter captures early life in Western Washington beautifully. I was delighted to read Grandma Mary's writing as it shows so many parallels to my own family stories of the same place and time. Grandma Mary Wakefield passed away five years before I met her beautiful grand-daughter, Terri. I just met Mary Wakefield today through her amazing prose.

Here are two of the best paragraphs:

The very first remembered incidents of my life took place on this ranch, where we moved when I was about two years old and stayed until after Effie was born. I do not remember her birth, though I nave often heard Mama (your grandmother) tell how Dr. Van Winkle came to the ranch in spite of the rapidly rising river the night that Effie was born. The Doctor, who lived in Oakville, where he had come as a young man about the year 1887, was the proud owner of an automobile which, in good weather, he drove about town and even on his country calls wherever the roads were good enough to permit it. But this was in the year 1908. The best road conditions then would seem very crude to us now, and at that time of the year many of the roads were partially covered with water. The heavy seasonal rains and snow had caused tas river to rise rapidly and the Cedarville bridge was underwater. During the winter months and under such conditions the Doctor still used his horse and buggy. Usually when he came to a bridge he dropped the reins, and the horse waded or swam across the river. Horses were slower than automobiles, but they had much more sense, and their motors would not fail if they got wet, so a good horse could be trusted to get his master to his destination safely if he was given his head. The next morning after the baby was born, Dr. Van Winkle started back to Oakville. Papa offered to take back across the river in a boat, but the Doctor told him that the horse would swim across the river and draw the floating buggy behind him. This he proceeded to do while Papa waited and watched to be sure that they would make the crossing in safety.

Of course all this was beyond my knowledge or understanding. I do not even recall learning that Tom and I had a new baby sister, but I still remember one thing very clearly about that December. Then it was that I first saw Santa Claus. I remember coming into a room and seeing him, a kindly man with white whiskers sitting in front of the fireplace. Years later, when I was grown and had children of my own, I met Mr Calder, and he still had the long white beard. He had grown famous as a local character, partly because of his long life of service in the community, and partly because he had never shaved since the day he first came to this part of the country. He often told the story of now he had gone to a barber immediately upon his arrival here because he had lost his own razor while on the trip. But he found that they were charging what was considered an outrageous price for shaves, and there was not a single place where he could buy a new razor. He swore then and there never to let a barber touch his beard until the price of shaves came down. We all know that the price never came down, but while he waited for the razors to come in he found that the long whiskers suited him so well that he never bought the razor. Mr. Calder died last year, an old man in his late eignties, still wearing his long white beard. That's one of the longest price wars I ever heard of. I certainly hope the present price of haircuts doesn't result in an epidemic of similarly protesting Samsons. 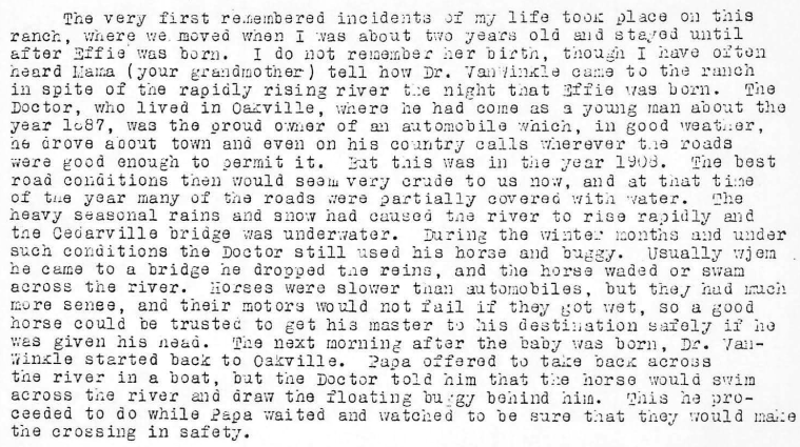 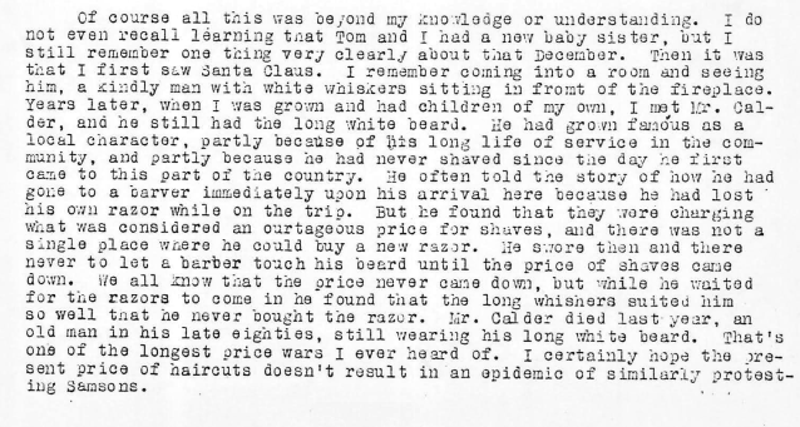