It is spring. Daffodils should be here.  But I am waiting and watching, as my daffodils are moving slowly (like me).   It's not every spring that I wait and watch as I do this year, but ... well ... I must admit ... I planted some daffodils last fall in a wildly optimistic moment.  And I love daffodils.

The act of planting daffodils is uncharacteristic for me.  That is perhaps mostly attributable to the good and reasonably predictable patterns of a long marriage.   Terri loves her hours in the garden, and I have an easy out.  But out front, there was this ugly bush bordering our neighbor's place.  I thought I could do some good in the earth, and while Terri takes care of a third-acre, I could take care of ten square feet.   Plus, I didn't like that bush, Terri didn't like that bush, and the new neighbors didn't like that bush.

That last part was inferred from a conversation:

I'm pretty good at inferences, aren't I?  So last fall, armed with pruners, shovels, and picks I went to work on that bush.  I sweat a lot, cussed a little, and generally lived in the moment.   But the last of that bush was not budging.   Fortunately my neighbor, Ben, came over with all of his wonderful, youthful, brute strength. While I was in the shop looking for a longer lever, he whispered to that bush and yanked out the last of it.

I had a plan, and desperately wanted to act before time, weeds, or thoughts of landscaping cloth intervened.   I turned the plan into action, and returned from Lowes with pounds of bulbs:  daffodils, tulips, and crocuses.  Within a few days all were planted to their prescribed depth and the new bed was covered with a thick mulch of grass clippings.   And so I wait.  But not much longer.  Today, gratification is arriving: 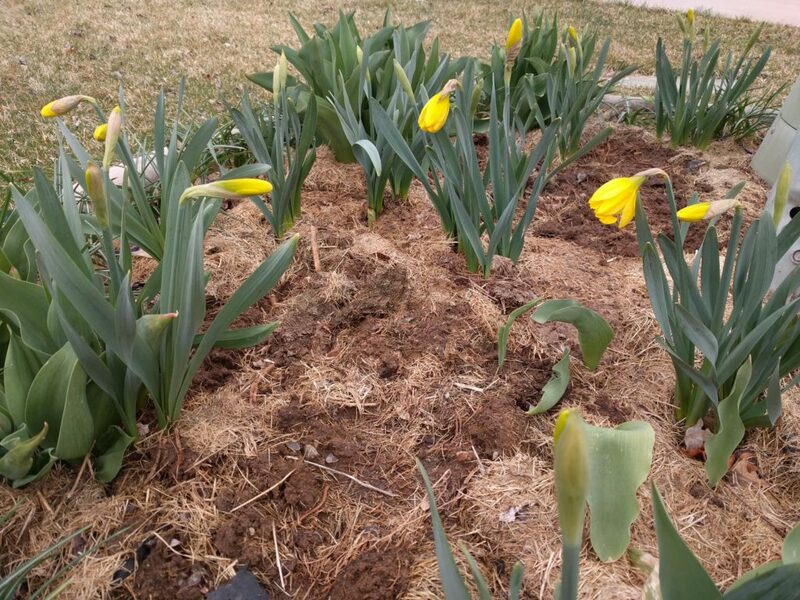 I come by this love of daffodils honestly.  During my youth in Western Washington, daffodils were everywhere.  In lawns until the first mowing, along roadsides, and even in flowerbeds!  Among my favorites were those that popped up at the base of the family tree (that is to say the phenomenal cherry tree in the east yard of 933 Crescent Street).   This picture from 1963 is a little late for daffodils,  but if you squint, you may see the leaves. 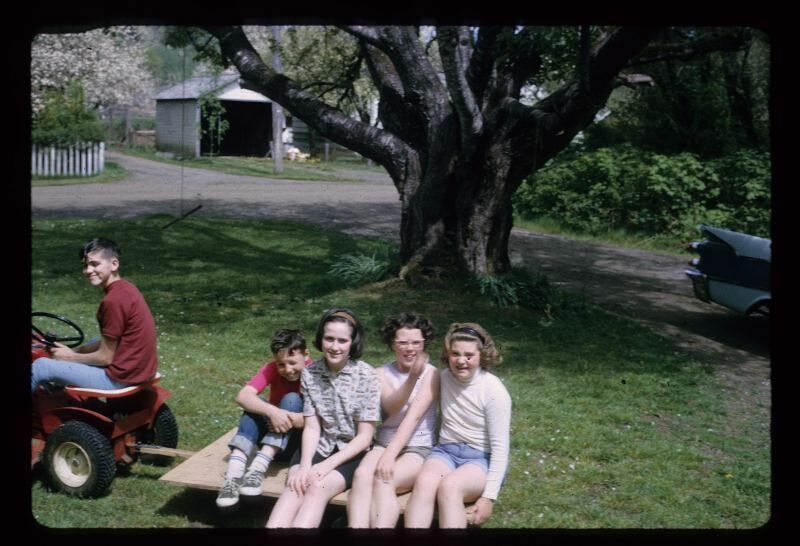 Daffodils are my quintessential image of Spring. Of rebirth, and of Easter. I lay claim to a rich Christian heritage whose foundation was centered at Raymond Washington's First Methodist Church. For one who was (and is) a Doubting Thomas, my richest experience of Easter  is of daffodils.  In the 1960s Raymond's MYF (Methodist Youth Fellowship), with major support from Bill Morgan and parents, gathered thousands of daffodils in the week before Easter, so that on Easter morning we could display our symbol of the Resurrection outside the church. It was an amazing symbol, and an equally amazing  experience. 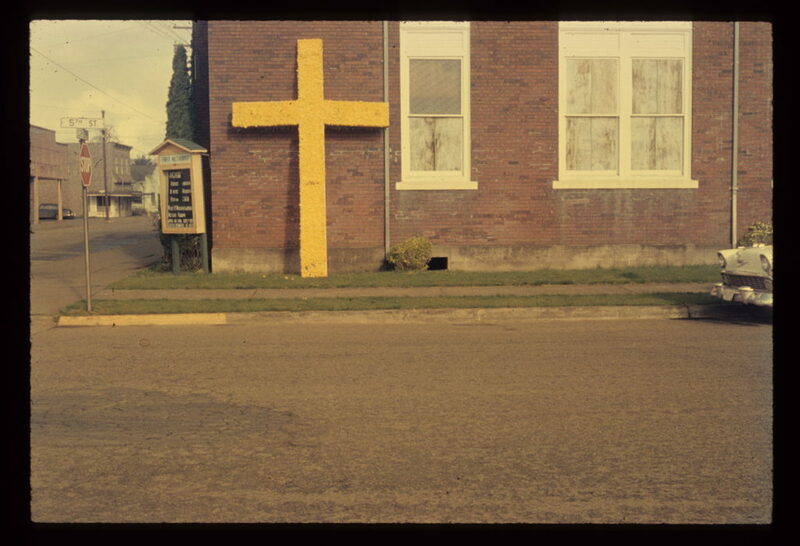