I've never built a kayak! This is the story of Roy Rudd. When I read his story, I felt as though I'd been there. Worked the wood, floated the river.

It was a warm summer day and my brother Bob and I were trying to convince our parents that we needed to cool off. My uncle Mart had an old row boat. We hoped we could make a float trip down the Tippecanoe River. After a few hours of bugging Dad and Mom, they succumbed to our pestering. We decided to put the boat in at the Talma boat launch, and float down to Island Park on US 31 North of Rochester. Our Uncle was reluctant because the boat had a small leak. We were successful in convincing him as well. We agreed to take a coffee can to dip the water out at regular intervals.

It was early morning and the time came to put in at the Talma Public Access Launch. My brother Bob, our cousin Jerry, and me were ready to start an adventure down the Tippecanoe River. Bob was armed with the only oar we had, Jerry with a push pole, and me with a makeshift bilge pump (an empty Folgers can). We agreed to call home when we reached Island Park. We said our goodbyes, and we were off. As we made it out of site of the bridge at Talma we were in uncharted waters. At least to us. Around every bend in the river lay different scenery. Well that's what my brother told me. I didn't have much time to look around, because the water was coming in about as fast as I could dip it out. The trip proceeded without having to call the Coast Guard to rescue us. As I recall the trip only took about 3 hrs. We called home and Dad came to pick us up.

It became clear we were born to be river explorers. We wasted no time planning another trip. Our plans hit a brick wall when we ask to float from Island Park to Winamac. Dad and Uncle Mart condemned our mighty vessel. There was no way they were going to let us ten and eleven year old kids make a float trip overnight down the Tippy. After a lot of looking for plans we came across a book published by Popular Mechanic Magazine “The Boy Mechanic". On page 96 and 97 we found plans to build our own boats. We finally got up enough nerve to ask if we could make the trip if we built our own boat. After a few days It was agreed but only if they determined the boat was safe.

The plans would have to be modified if we were going to build them in our workshop basement. The only way to get the boats out of the basement would be thru a hopper window which only measured 27 inches wide and the boat plans called for it to be 28 1/2 inches wide. My Uncle Mart worked at Chris-Craft boat factory, and regularly brought home scraps of marine plywood and Mahogany lumber. I remember sorting thru piles of plywood till we found enough to start building. I was talking with my brother a couple days ago and he reminded of the thousand plus screws we had to drive in by hand. He also mentioned the blisters on the palm of our hands. We never told Dad about the narrow hopper window. As the build progressed, dad would check on us. On one such inspection, Dad looked at the plans, walked over to the window, and measured it. Dad said " Hold up there boys, it's not going to fit out the window". Bob told dad that we had changed the width of the Kayak to fit thru the window. Dad then measured the boat, turned and made his way back up the stairs. I believe that was the last time he checked on us.

My Kayak was the first one we built. We built it as close as we could to the plan. Bob's was built a little longer and narrower. Jerry's was used as a mold to make a fiberglass boat that Uncle Mart helped with. The summer was getting short. We made a final push to get the boats in the water to check for leaks. Dad agreed that the boats were seaworthy. The next adventure was a go.

Launch day finally came. My kayak was the only one with the waterproof compartment. it was determined that I would carry anything we didn't want wet. This made my boat heavier than the other two. I sometimes struggled to keep up with Bob and Jerry. This adventure went pretty much like the first accept I didn’t have to dip water to stay afloat. As we rounded each bend in the Mighty Tippy, a new adventure seemed to start. On one such bend we came across three girls playing on their pier that was jetting out into the river. As I recall Bob and Jerry was ready to stop for the night. Their plan was thwarted by a somewhat concerned adult. Their father felt it was necessary to get us down the river. He warned us about an old gristmill dam that was still creating a small waterfall. He thought we better get past the dam before dark. We decided his warnings were more of a concern for his daughters than for us. It was time to move on. When we rounded a bend in the river about two miles from the girls, we decided we were right. We could hardly tell there was ever a dam there.

We continued down the river till near dark. We found a nice place to camp, and pulled our kayaks upon the sandy bank. We gathered a few sticks and started a fire. It was a little chilly, so we placed our sleeping bags as close to the fire as we could. There was a flash of lighting, a boom of thunder, and the rain started. The wind was no help either. We hadn't planned on the rain, so we never packed a tent or even a tarp. Bad planning! We took turns finding something to burn to keep warm. I recall finding some wood that someone had split and stacked, but no sign of a house. If this was going to stop us from freezing to death, then it seemed like fair game. We somehow survived the night. As we were packing up and getting ready to continue down the river, someone was hollering at us. The old man was apparently a caretaker at this place. He informed us that we were on a government facility and we better get off before we got in any more trouble. We had landed our boats on land owned by Culver Military Academy. We wasted no time launching our vessels, and paddling our way downstream.

We continued down the river till we reached Winamac State Park. As we passed an older gentleman setting on a park bench, trying to catch fish, he gave us a wave and we waved back. After paddling for about twenty minutes, we rounded another bend, and to our surprise we could see that same old man with his back to us. Yep! That was the same guy. This part the river made a big loop and came back to within about fifty yards of itself. After we passed thru Winamac we decided to call home at the next bridge. I believe it was on State Road 35. Dad came with the pickup truck, we loaded the Kayaks into the back, climbed in the cab and headed for home.We all decided we would do it again someday, But more important projects loomed in our near future. Dad traded the Kayaks for a fiberglass boat with a 25 hp. Johnson outboard. That was the last time we laid eyes on our sturdy vessels.

I was scanning the Web a few day back and was reading a thread about a guy that was looking for a book called "The Boy Mechanic". He said he had built a kayak from the plans in the book, and was trying to find the book again. Someone suggested he search for the book on Amazon. I thought why not. After about a week I had the book in my hand. I hurriedly scanned over the index, and there it was "A Sturdy Plywood Kayak".

Over the years, I thought it would be nice to build the same boats and go down the Tippecanoe with my boys. The time passed, and I thought maybe I'll make them with my Grandkids. That didn't happen either. Now that I have the book, and seventy year old knees, I'll place the book where my Great Grandson will see it. I'll put a copy of this story between page 96 and 97. Maybe he will be inspired like we were when we were kids. 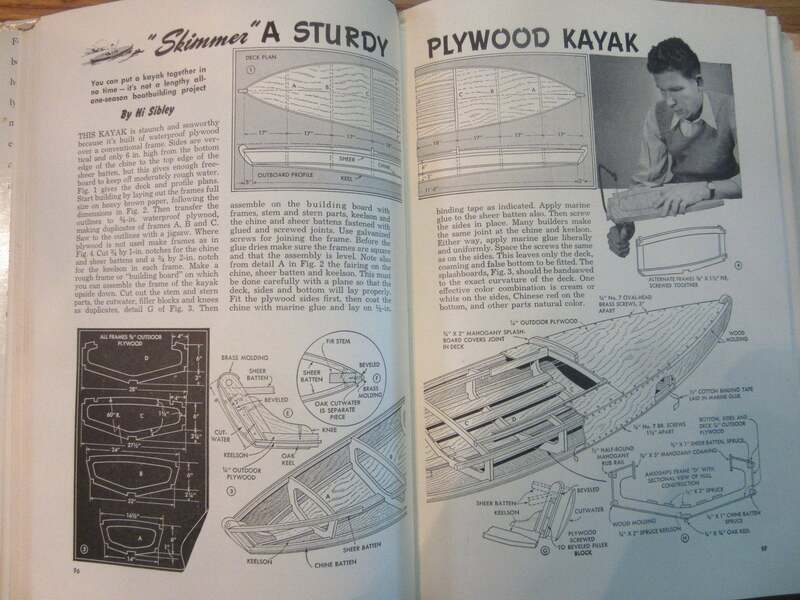