In The Salt Lake Papers, author Edward Lueders describes a visit to Antelope Island with his cousin from Chicago. Unpopulated and barren, Antelope Island sits just a few miles from my home along the urbanized Wasatch Front of Utah. As I read Mr. Lueder's book last night, I was naturally drawn to his description of a visit to the island with his cousin Len. Naturally -- because I too enjoy the sights, smells(!) and sounds of Antelope Island: an enigma in the urbanscape, and a reference point to our geologic surroundings. Naturally too -- because if a cousin from out of state comes to visit, we are probably going to tour Antelope Island.

Edward Lueders wrote of the trip:

... I glanced over my shoulder, checking my bearings, curious to locate myself in relation to any familiar landmarks — that is, peoplemarks — in or around the bustling city we’d left behind. But we were sealed off. Only in my imagination could I visualize the busy sprawl of the Wasatch Front, its preoccupations and tentacles hidden behind the long spine of the island rising behind us. I searched the sky for the telltale pall and stain from the Kennecott smelter at the south end of the Lake, looking in vain for the towering stacks topping the blast furnaces whose smoke usually spewed into the ambient air. Evidently they were in temporary lull or remission, for nothing showed. I turned back, elated in my enveloping sense of pure isolation, to survey the great reaches of salt water again.

For an unbroken, soundless, continuous interlude, I felt the fullness of unencumbered time, participating in the sunlit vitality that animated the enormous land- and water-scape before me. The air was sharp and sweet in my nostrils, clean as I took it deep into my lungs.

Len and I had long since run out of our small conversation. Silence had taken us over—the enormous, complete, eloquent, singing silence of the far-reaching scene we were in. It was full of music for me rather than voices—music in my being rather than in my ears, sweeter and dearer music, as Keats intimates in his ode, for being unheard.

The midwestern voice of my cousin from Chicago broke into my reverie. “Where are the people?” he had asked. A note of small panic was in the tone of his question. 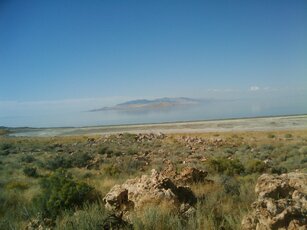 “It’s so quiet,” he said. “I never heard anything so quiet,” he added with a short laugh. But it was a nervous laugh. I looked in his face and saw genuine bewilderment.

“It’s too quiet,” he decided. “How can there be all this” (he gestured broadly over the Great Salt Lake, out to the distant horizons) “and no people?” ...

The Salt Lake Papers, is part memoir, part reflection on language, and part dissertation on the geophysical space and time that we inhabit. Without question, The Salt Lake Papers would not normally be on my reading list, but as it turns out, I considered it to be assigned reading, because through good fortune, I unexpectedly became personally acquainted with Ed Lueden in the past week.

A few weeks ago I scheduled time to repair and regulate the grand piano in the day room of Friendship Manor, an assisted living facility in Salt Lake City. When talking with Wendy, the coordinator of events there, she told me that a resident named Ed had a real interest in having this particular piano improved so that it was easier to play. Assisted living facility? A certain resident? I knew right then that I was going to meet someone interesting.

Last week my wife, Terri, accompanied me to Friendship Manor so that I could evaluate the piano action and bring it to the shop for some work. As we walked into the dayroom with Wendy, I smiled as I heard a lovely jazz rendition of "I left my Heart in San Francisco" coming from that piano. And we met the very talented jazz pianist, Ed Lueders. We visited some as I worked there, and learned a bit about Ed and his talent: Ed is blind, and learned to play by listening, not reading music at all. He follows in the footsteps of other great musicians who also have learned to overcome a deficit in vision by maximizing their use of the other senses. As I packed up the piano action to take it with me, I knew that I had a discriminating customer, but I was also looking forward to satisfying the man.

While we were there, we learned that Ed was a long-time resident of 17 years. Upon leaving I said to Terri that he must have come there because of his poor vision. He certainly didn't seem old enough to be a long-term resident.

Every once in a while. At just the right time. You meet a soulmate. The right person at the right time. That was yesterday, when I returned with the piano action and did final adjustments on site. Ed was there to evaluate, and he did approve my work, but the important thing was the music and the conversation. Early in the conversation I heard an amazing assertion.

Wendy said, "It's just marvelous to think that Ed can play like that at the age of 97!"

Our conversation went on for at least an hour. We focused on our mutual interest in pianos and jazz pianists in particular. As the talking meandered, I also learned that Ed is a veteran of World War II, a writer, a poet, a retired professor and chair of the English Department at University of Utah. Since his fifties, age-related macular degeneration has degraded his sight to the point that he can only see peripherally. He can see a keyboard, but not the individual keys of the piano. He says he's "a macular degenerate," but he plays jazz piano publicly twice a week in the atrium of the University Hospital. All of that but more than that: here is a humble, wise, empathetic man of 98 with the inquisitive mind of a life long learner and teacher. He is an inspiration to me and a model for how I might approach the remainder of my time here in this geophysical space we share. 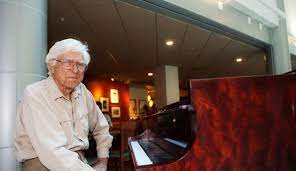 Before I left, I asked Ed where I might get one of his CDs. He quickly responded, "I'd love to give you one. What you did for this piano is so worth it. I've got the right one for you. I'll go up to my room and get one I recorded when I was younger. But it's my latest CD. We recorded when I was 93."

So I have a copy of the CD "Ed Lueders @ 93." And forever on my visits to weird, timeless Antelope Island, the music I'll hear there is the jazz of Ed at 98.

A video interview of Edward Lueders is available on PBS: https://www.pbs.org/video/edward-lueders-uxg5jm/

A bibliography of Edward Lueders: https://mappingliteraryutah.org/utah-writers/edward-lueders